Our first trip to Atlantida was lovely.  We stayed at the Hotel Argentina right on Calle 11 Y 24 which is about a block from the main restaurant row and the center of town and close to the beach. The hotel was very nice, we had a well fitted room on the second floor with a queen-sized bed, mini bar and all the other necessities.

A breakfast buffet served each morning from 8 until 10:00 and included fresh brewed coffee, decaf and an assortment of teas, along with fresh orange juice. One thing I just love is hot milk for my coffee and they had two decanters filled so I can have my half and half. The rolls, medialunas, sliced breads, pastries were fresh each morning and they had two flavors of yogurt, several cereal choices and cut meats and cheeses plus whole fruits of bananas, apples, oranges and pears.  Condiments included a bowl of dulce de leche for your toast along with several other marmalades and butter. They do not have a restaurant on the premises but during the day if you need a little nosh they will make you a cup of tea or coffee and a hot sandwich of cheese and ham.

As you can see from the photo above I am not proficient at taking selfies, I think that is a good thing…. This is a shot taken after a lunch with Tannat wine and a Chivito.  I am happy but ready for a short siesta and Joe is acting as my own personal pillow.

The beaches are well below street level, wide in most places and have a beautiful fine white sand.  Sea oats and other grasses grow along the shoreline on the dunes and we saw signs which I think said they are protected by the government like on US coastlines.  Many of the beaches have large trees for shade for those who only want a bit of sun.

In 1908 a group of Uruguayan doctors and medical students planted an estimated 150,000 pine and eucalyptus trees in an effort to beautify the area and stabilize the sand dunes. After the tree planting the area became known as Playa de los Médicos (Beach of the Doctors). However, the doctors and medical students decided on the name “Atlántida”, after Plato’s legendary lost continent of Atlantis. Some of the trees have an unusual trunk where the bark is in a swirling pattern and peels off leaving stripes of different colors. There is a variety of eucalyptus that has a multicolored bark.  See picture below.  We have not seen this variety yet but I would love to see it close up. 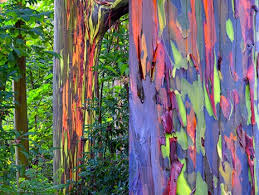 This is the Eagle house overlooking the beach – open to the public. Built many years ago by a famous visionary Natalio Michelizzi who also built some of the other landmark buildings in the 30s and 40s.

This metal sculpture obviously represent the sun and actually resembles part of the Uruguayan flag. Certain times of the year you can watch the sun set through it.

While walking back from the beach we found a fountain in the middle of an intersection. Surrounded by benches some in the sun some in the shade.  So of course we took a short break to listen to the birds and catch our breath. This fountain built to thank the medical students and doctors for their work to beautiful Atlantida. Each level of the fountain represents the different name the town had at various points in its history.

This 100-year-old boat sits alongside a seafood restaurant right on the beach.  Looks like a great place to have a drink and lunch or early dinner.  We will try it the next time we are back in Atlantida.

As you can see Joe is one happy guy. He is sitting at just another entrance to the beach.  One of the many great things we noticed while in Atlantida is the number of trash receptacles and benches, they are everywhere and the town is very clean and well maintained.

We found the fresh fish place right on the beach.  That day they had fresh tuna steaks, merluza (hake), black corvina and another choice which we both cannot remember but looked good.

Teatro ALSUR a theater / movie house / cafe is located in town.  They have live theater performances as well as show films and do art exhibits.

We think this is another species of eucalyptus.  They line almost all the streets, are huge with a great canopy of leaves that give shade to the sidewalks and in some cases the entire street.

View down to the beach, also lined with trees, there is a set of steps and a wooden walkway for those of us having problems making the stairs.

An amphitheater located on the Playa Mansa.  It has live performances and even dancing on the weekends.  Many just come to the beach with their yerba mate tea or snack and watch the sun set.  The Yerba Mate Tea is almost like a religion here, we saw many many folks with their mate cup, thermos filled with hot water, silver straw and even some have a leather carrying case for their tea. See below. When we originally flew into Montevideo from Santiago Chile one of the national futbol teams from Montevideo were returning from a match in Chile. There were as many of these mate kits as carry-on luggage!

Enjoying a well deserved rest after another one of our walks.  The town is lovely and we have decided to make it our home. House hunting news to follow.

15 thoughts on “Pictures of Our Trip to Atlantida”